Dan’s early career included a year and a half stint drawing political cartoons for Madcap Magazine and illustrating underground projects such as Maximum Rock and Roll. In 1997, after struggling through a violent car crash and a knife fight with a crackhead that severed the tendon on his left thumb, he attended art school. Receiving some commercial and local gallery acclaim for his artwork, he moved to New York City in an attempt to kick start an art career. Heavily immersing himself in the local hardcore scene, he produced artwork for the bands Shai Hulud, Indecision, Coalesce, Locked in a Vacancy, Beyond Reason, Zombie Apocalypse , not to mention various local record labels and venues.

In 2000, he started tattooing, initially working on many musician friends. A year later, in September 2001, he was stricken with brain cancer and underwent surgery, chemotherapy and radiation. Three months after the surgery, he married fellow tattoo artist Monica Castillo.

After a brief trip down south, that included owning a short lived tattoo shop with the infamous Joe Truck , in a venture that ended in disaster, he returned to Manhattan. His work started appearing in both a growing number of tattoo magazines and more fine art influenced outlets such as Aphrodesia, and The Tarot Project. Tattoo related books such as No Regrets: The Best, Worst, & Most #$%*ing Ridiculous Tattoos Ever and Inside the Tattoo Circus: A Journey Through the Modern World of Tattoos also took notice and included features.

Tragedy struck again in 2007, as his wife of 6 years, Monica Henk, was killed in a motorcycle accident by a hit and run driver. Despite extensive coverage in the local media and vigorous campaigns by both the tattoo and motorcycle community, the culprit was never found.

Sick of New York, he moved to Austin, Texas for three years, and started doing a regular comic strip entitled “Rollo & Me” for Tattoo Artist Magazine. Illustrations for Black Static Magazine, and This is Horror followed suit.

His first novel, The Black Seas of Infinity, was published by Anarchy Books in 2011, and he started an illustrated calendar featuring a variety of artists. Deadite Press released the first book with a cover by Dan, a novel entitled “The Sopaths” by Piers Anthony.
A limited edition chapbook “Christmas Is Cancelled” came out courtesy of Splatterpunk in 2013, and in 2014 he started columns for Tattoo Revue and Skin Art magazines that lasted for a 3 year span.
A reissue of his debut novel was released by Permuted Press in April 2015, as well as a collection of his short stories entitled “Down Highways In The Dark…By Demons Driven” in August of the same year.
He continued his work for independent magazines, doing art for Red Door Magazine, The Horror Zine, Litro Magazine, a slew of books by the imprint Out Of Step, and every issue so far of the British horror zine Splatterpunk. The books “Splatterpunks Not Dead”,  “Splatterpunk Fighting Back”, “Past Indiscretions-The very best of Splatterpunk Magazine”, Insatiable, and a joint series by Marc Anthony May entitled “The Red Death” and “The Flood” all featured his work. His third book, “The End of the World” debuted in March of this year, and he’s currently writing short stories, the latest of which, “Watching the World Burn”, is available on Amazon. 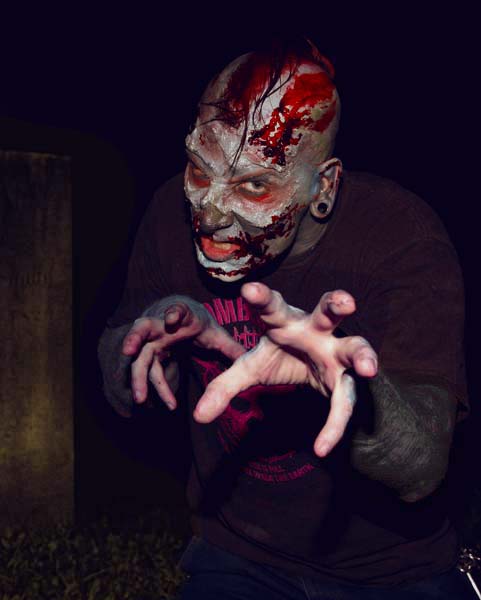